A nifty north swell smacked into San Diego on Thanksgiving weekend. I had a blast surfing with my son, Nick, 15, and my son, Erik, 18. Of course, they ripped circles around the old man. I was lucky to catch them just before turkey-time at about 3:30 on Thanksgiving Day: 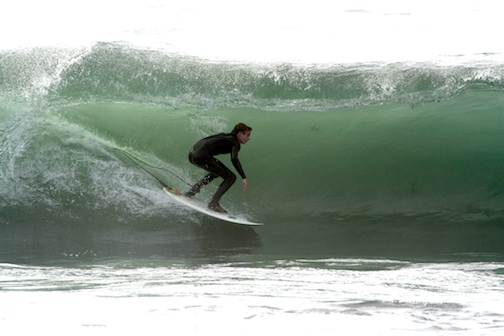 Is that a thick lip, or what? 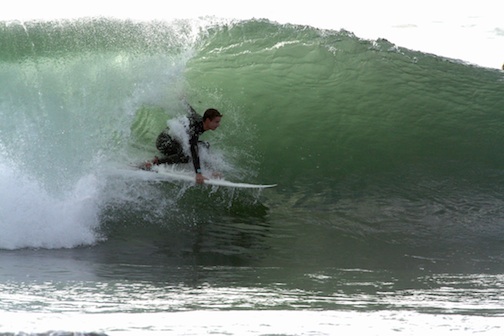 The king of the back-side rail grab.

Swells have come, swells have gone. Nothing too big, a few days small. One thing unusual happened: my wife, Diane, took our golden to the beach, as she does often. About to toss his beloved tennis ball into the water, she saw a large (300 or so lbs.) sea lion pop up, stick half his body out of the water, and bark ferociously at Teddy. Intrigued by this potential new friend, Teddy made as if to jump in the water and say, "hi."

Diane thought better, lured him away with dried chicken strips, and beat a hasty retreat. Next day: same thing. She tried to walk up the beach, but the sea lion followed, barking, only a few feet offshore, baring his teeth, acting very aggro. She ran an Internet search and learned that the males get territorial and violent during mating season. She found one story from the UK: a guy threw his tennis ball into the ocean, his black lab followed in after it, and a male sea lion attacked, appearing from nowhere. It dragged him under in a spray of blood, and that was it. Dead dog.

Teddy, I think, was lucky.

Took Diane and the boys to Los Cabos, had a sweet flight on Alaska Air--they take good care of your surfboards and the fees aren't too bad (although bad enough). We made our way in a rental SUV down to San Jose del Cabo, found a very comfy condo overlooking three surf breaks. Beautiful 4-6 foot waves, coming up from the south, warm 80 degree Sea of Cortez water--man, everything was A-OK. 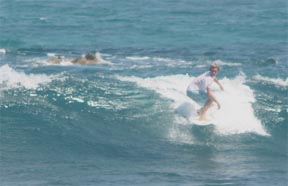 The roads--narrow, lots of stone fencing. Built with cost savings in mind, not safety. I drove very carefully. We had a nifty barbecue at Clayton Silver's hacienda--he had a fresh caught dorado, grilled over a mesquite fire, lots of delicious tomatoes, cilantro, and the like mixed in to make burritos from Heaven. A buddy of his, the fishing boat captain/owner, serenaded us with his renditions of Jimmy Buffet songs...not bad after a few Coronas.

Erik and Nick took off with Bub without the old man (i.e., moi) to surf Shipwrecks, which they caught at a perfect six-foot. A barrelling, insane wave, according to Erik, who will have to give you his own firsthand report, since I was back at the condo surfing La Roca with ten others.

La Roca--a super fun wave. You sit just south of the rock, and I mean just south, almost touching it. When a set comes, you maneuver in front of it (hopefully on the inside of everybody else) and the rock gives you protection on the drop and a nice take-off push. Then it's off to the races, a nifty right-hander that 'll let you cut back once in a while but not too much.

Great wave, when the crowd lets you nab one. 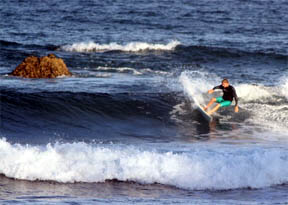 Fun little south came in yesterday, today there are remnants but too much wind from the leftovers of Tropical Storm Fabio.

A friend took a snap of Erik surfing last February, another shot of him just before he broke my board. Definitely some winter juice... Some good days here and there, nothing epic. Crashed my long board on some rocks in 3-foot waves, that's the risk of surfing without a leash at rocky-shored reef breaks. A lifeguard saw a two-foot fin at LJ shores two days ago, and closed the beach. The newspapers went crazy, "Great White Sighted in San Diego," etc. Of course, I went surfing the next day (the fourth of July)--and didn't see anything. We all know they're there.

The past three days have brought epic surf. Had a great session at Seawind on the last day of March, then came a stormy, giant, unsurfable day, and finally, on the third day, things cleaned up. Even though no one else was in the water, I paddled out into fifteen-foot Headkick.

Many things told me not to surf yesterday. There was the fact my son did not surf--Erik will paddle out in almost any conditions. There was the checking out of the waves with my neighbor, Brock, who decided to continue his bike ride. There was my forgetting my booties and having to drive back home (the water's 55 degrees).

But the sun was shining, nobody else was out, and big waves have a siren call for certain fools (myself included). So out I paddled, beachgoers in various stages of undress watching me with upraised eyebrows.

It was a long paddle. Didn't seem that big at first, but it took a long time to get outside to the blue water. Once there, I kept paddling, from long experience. I knew those big set waves that come every hour could nail me on the inside. Short of breath, a dark line appeared upon the horizon. Uh-oh.

Ocean does not listen. Ocean rears up and feathers. There's a giant lip threatening to break upon my back. Rats. There's no way I'm gonna duck dive this baby, not with an 8'4" gun. I push it to one side, and dive, down into the sweet depths of safety. The wave roars over my head. I relax, waiting for the usual holdown to release me from its grip.

I surface. Only half my board remains, the front half is...gone.

Long paddle on a ragged-edged board. The front half is floating south. I grab it, riding it like a boggie boarder, and paddle in, dragging the rear half with my leash. Long paddle. Not a single wave under my belt.

The trouble with owning a big wave gun--you'll use it, take it out when the waves are big. If you don't own one, you sit on shore, sensibly, and wait for the waves to get under fifteen foot, to more reasonable heights.

Non-stop surf, pretty much. Some days stormy, other days with high-pressure Santa Ana winds, but swell after swell. The other day, I paddled out at Headkick, trying to duck into some head-high set waves, when I saw a pair of fins coming straight at me. In front of the two dolphins was an underwater sister, moving at warp speed. She (or he) shot under my board, just missing my feet. In the clear water I could see every detail of the animal. About ten feet long, and close to a thousand pounds.

Once again, I marvelled at how fast bottlenose dolphins can move, how perfectly adapted to the sea they are, and how wonderful it is to be alive, enjoying the natural world, entering, if but for an hour or two, the wilderness of the sea. I shared the story a few days later at Seawind with George, a crusty regular there. He reminded me of an event that happened decades ago at Black's Beach, where a surfer, seeing a newborn dolphin close to him, paddled over and petted the thing, as if he were at Sea World. A second later, BAMM. Momma swam into him, just hard enough to break his back in six places. He had to be helicoptered off the beach. We both read about it in Surfer Mag back in the 1980's.

And yet another NW well, this one accompanied by a sulty Santa Ana wind. February in SD, baby, this is our summer! June will come, and it'll be cold and cloudy and foggy, Coastal Eddy will be here--yuck. But February--yee hah! Diane took some pix, with a battery this time, and even though I find it very difficult to surf with a camera lens trained on me, she caught a respectable picture. She also nabbed the shot of a dolphin cruising through the line-up as I paddled out. At least it wasn't a whitey. 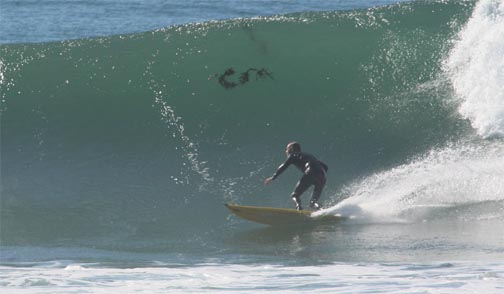 The author, at Headkick Reef, on a gorgeous February day with dolphins. Photo: Diane Vanstrum

Another big day, Sunday, the 22nd. As I stood on the beach at Headkick, with my trusty 8'4" gun, one of my son's buddies, Kyle, dragged himself from the soup. "How was it?" "So scary..." But his mom, on the stairs, caught him riding a big one all the way in.

After a long paddle out, I caught a bomb immediately. Rode it a long way before it closed and I bailed. Long paddle back out. Nobody else in sight. Somehow that does make it scary. Just one other surfer is always nice. Not twenty--just one. After that I couldn't connect, got caught, got exhausted, and paddled in. Brian, unbeknownst to me, paddled out an hour later, and photographed this surfer at Headkick sometime after I paddled in: 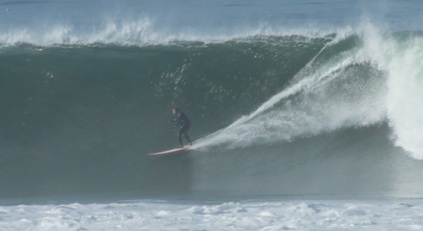 When I got home, I saw my son, Erik, had borrowed my 7'2" everyday board, which he uses as a gun. Hmmmm...He didn't bring it home. Shortly after this picture was taken, he pulled into a giant barrel and busted it. Is that a thick lip, or what?

The big swell arrived today, probably the swell of the year. So--what does yours truly do? I get off work, very difficult, pull strings, cash in favors, you name it, get my wife to take pictures no less, she graciously agrees, I'm so excited: fifteen footers, maybe bigger, and a camera on the beach for the first time in decades. So, I paddle out, it's every bit as big at Breakrock as advertised, five guys out, including Brian Caldwell, who's ripping it up. Super camera conscious, I throw caution to the winds, paddle into a giant--and get pitched. Horrible hold-down. Desperately clawing my way back to the surface, more hold downs, you get the idea...

I try another. Same result. Try another--knowing my dear wife has only so much patience, and score. I make the drop, hang a bottom turn, come back up, a couple of hits, and out. I'm stoked. At least I caught one. After more disastrous hold-downs, getting caught inside, I give up and paddle in, exhausted. That's when I find out the camera battery is dead. Such is life.

Erik surfed at Breakrock this a.m., caught a good one, and some surfer in the line-up says, "Nice wave." Turns out to be Rob Machado. Erik says, "How cool is that?" He surfs near Seawind on Clouds, way out. I look for him with a fresh battery but can't make him out, not knowing he's disguised in a hood. I grab a shot of this unknown on a smallish wave, and leave. Nice wave, unknown guy. 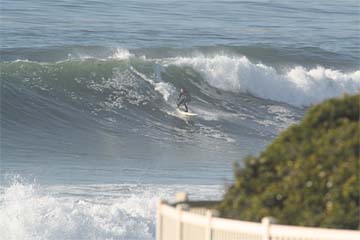 Finally! A decent north swell, big enough to pull a gun down from the garage rafters. I surfed some ten footers at Headkick, caught about six, took one nasty pitch when a wave sectioned out from under me, and in general, had a rockin' good time. Went in search of the boys, found Erik, and caught him surfing by himself at inside Salamanders: 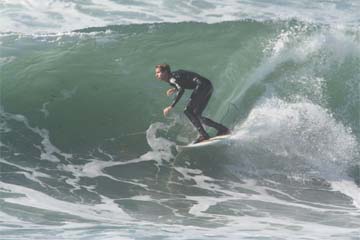 Nick was way outside, surfing bombs, but I missed him.

2012 is off to great start, and there are storms stacked across the Pacific. Stay tuned.