The waves never stop, as we age. They do get bigger, or at least it seems that way to me--more CO2 in the atmosphere, more heat in the system, bigger storms, bigger waves. This is not rocket science. OK, it's atmospheric science. But it's sound. Roger Revelle predicted it, and, at least over my 35 years of surfing, it seem true.

Here's Erik surfing at Seawind a few days back: 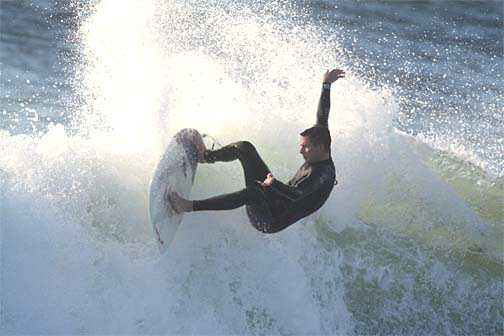 OK, there were plenty of big waves in the past. One must separate climate from weather, and overall surf history from swells. It's probably impossible to do without using oceanographic measuring buoys over time. Anybody out there doing this? My friend Pierre Gascogne did it while at the U. of Hawaii years ago. I heard from Pierre recently; he sent me this photo from a December tow-in swell near Biarritz. 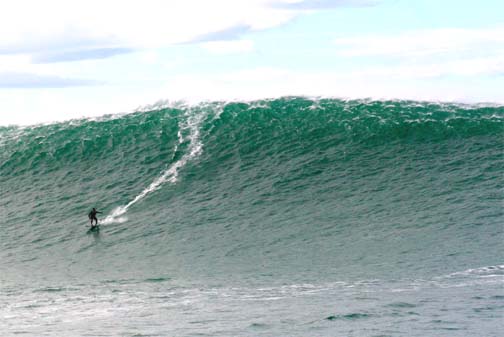 Just finished a Santa Ana weekend, beautiful weather marred only by a large brushfire in Camp Pendleton. A fine SW swell from Tahiti brought decent surf to Seawind. Rights, lefts, fifty or so surfers out, but so what. Everybody had a good time, what with offshore spray, scintillating sunlight, and plenty of juice. California fall makes up for our June-gloom summers.

First half of the summer, south swell after south swell. All the signs appeared of getting surfed-out: strange body rashes, damaged boards, even a few broken bones.

Lately, though, it's been Lago Pacifico. And, strangely, I'm OK with it.

Erik and Nick have both been working at the surf camp at the Shores. Erik runs camps, teaches surfing, and Nick does odd-jobs, sets up, and puts away everything.

Last night Erik finished his summer of work and filled us in with the day's adventures.

"We held a contest among the surf instructors. The surf was maybe 1-2 foot. I rode a long wave on one of the foamies, and, to top it off, did a head-stand."

"Yup. But, after that, every kid--these are nine and ten year-olds--every kid wanted to surf and do a head-stand. It was hilarious. One kid plops over, his legs wide apart, pearls his board into the sand. These are kids with five days surfing experience. You gotta hand it to 'em, they tried."

The rib fractures have leveled Erik. He can't sleep, can't cough, can't drive, can't even open a door without pain. Here's a shot taken of him by Michael Sangiolo the day (June 7, 2013) he got dry-reefed at Big Stone. (Note: Michael has got the touch, Google him for more great photos). One can appreciate how you might get injured in these conditions:

Erik Vanstrum, setting up for the barrel, and for a set of busted ribs...he surfed for six hours, didn't really realize the injury until the next day.

Nick and his buddy, Jake Rosenthal, meanwhile, where ripping at PL's. Photos are by Brock Rosenthal: 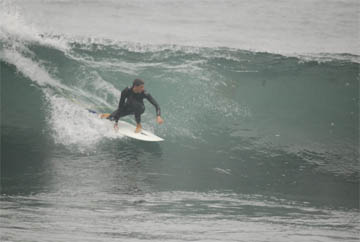 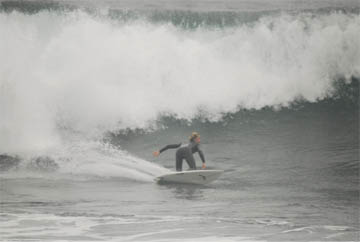 The South Swell of the year is smacking into SD as we speak. 40-foot seas south of Tahiti, and here in LJ, double overhead sets, easy. Some bigger. Bad news--I went surfing, and didn't take any pictures. Erik got dry-reefed at Big Rock and broke some ribs. He's down and out for a while. Can't surf. Can't drive. Can't laugh, and boy, he certainly can't sneeze.

A neighbor shot some stills of Nick. I'll get 'em up if he sends 'em to me.

Two weeks of unmitigated surf. Three storms twirling in the South Pacific, thirty-foot seas, one after another. And the waves are smashing into Tahiti, Fiji, Hawaii, Mexico, and, yes, even good 'ol Southern California.

I shot some pics today at Seawind and Big Stone. Here's Henry Hunt:

Erik Vanstrum, cutting back after a six-second barrel that I missed because I thought he'd never make it out: 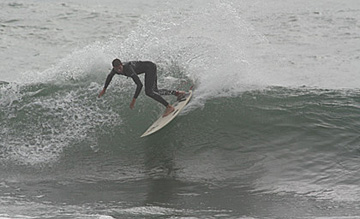 Nick Vanstrum, with new board and wetsuit at Seawind: 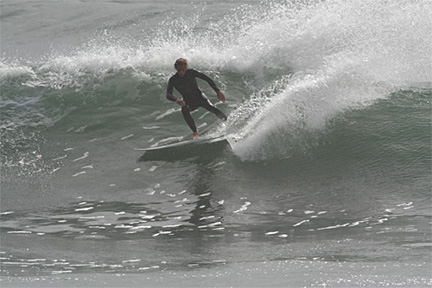 Earlier in the week, Erik did a faceplant on his board. 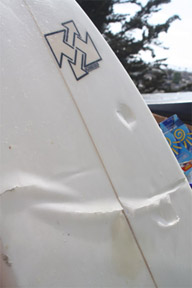 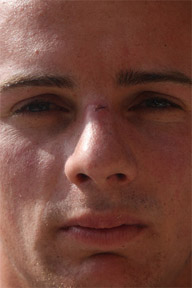 Nose. He got off easy.

South Swell Hits Seawind! Paddled out this morning, maybe ten guys in the lineup. Lines running out to the horizon from a storm off New Zealand with 35-foot seas. I decided to get way far out and find my bearings, and so paddled to the head of the pack. A set came, and I managed to scramble into a set wave, the type of long winding right that makes Seawind so famous.

Yikes, I didn't fall. I even cranked four or five turns and didn't pearl. Rode it in near shore, paddled back with a shit-eating grin on my face. Of course, soon there were thirty surfers in the water, really good surfers who know what they're doing, Henry Hunt, JP, Richard Kenvin, etc. So, after coming up empty paddling around for an hour, I finally caught a left and rode it in the beach. One hour, two big waves, and that's enough for me.

Had a week off, lots of waves, from the south, then the north (big), then the south again. I've discovered an old-guy-surfing-big-waves occupational hazard: Impact from wipeouts, if hard enough, can tear your retinae. I've now had the problem in both eyes, one requiring laser, one somehow sealing itself (an operculated tear, if you're in the know)...kind of a sobering thing. So I've made some changes in my surfing, using a slightly bigger board, taking more care, trying to surf more like an old guy than a young kid. It ain't easy. Wipe-outs are part of the deal.

You've got to go. When a wave with your name on it comes, you've just got to go.

The last three days have been, frankly, phenomenal. First the NW, followed by the big south. Life is good.

Here are some shots of Nick and Erik from yesterday: 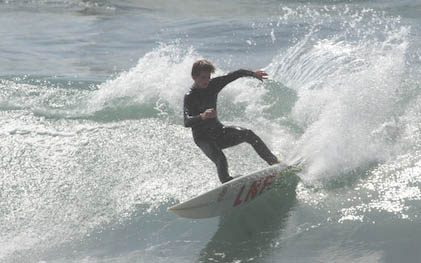 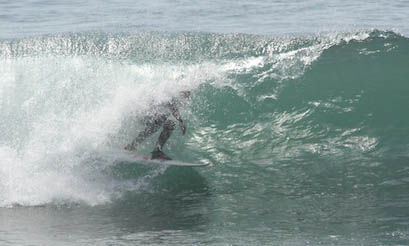 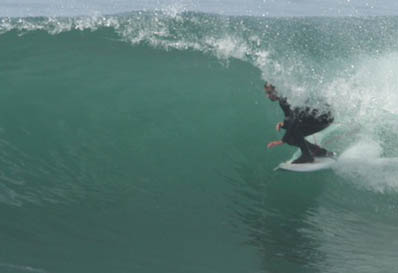 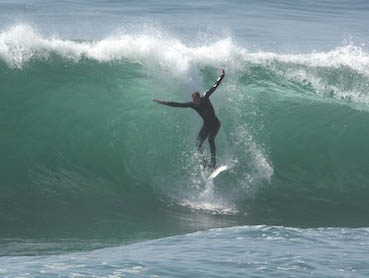 OK, OK, I'm behind here. We had a bunch of great surf around New Year's, then I went to work, and when I got a week off, it went flat. This week, we took in a pleasant six foot NW swell. Seawind has been so, so fun. The water has been so, so cold for San Diego (mid-high fifties).

Cold water limits the length of surf session. No way around it. Thicker wetsuits. Cramping muscles. Hypothermic brains. The plus side--people paddle in after a couple of hours. None of those six-hour sessions you see in the summer. Ergo...less crowds in cold water.

I'll get the old camera out soon...but, for now, here are a few of the surfboards Erik has shaped recently, the tails, anyway. Part of his "surfboard sculpture" project...